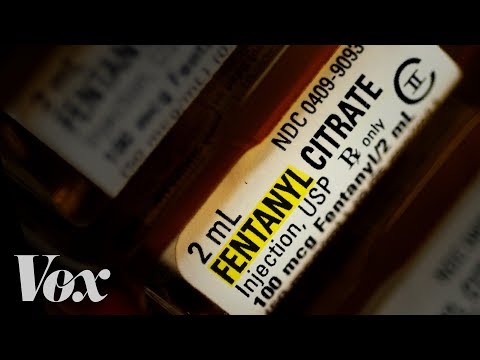 In 2015,  many died from gun violence in America, many died in car crashes, but even more, Americans died from a drug overdose. 52,000 people. That’s more people than there are seats at Yankee Stadium. More people are dying because of the opioid epidemic: a public health crisis that is causing waves of progressive drug use. Addicted users moved on to more potent drugs, like heroin. Now, an increasing number of Americans are overdosing on an even more powerful opioid: “Fentanyl is taking the opioid epidemic to a new level…” “…fentanyl…” “…more potent than heroin…” “Another drug is surging…” “Fentanyl. So potent you could die with the syringe still in your arm.” The explanation for the rise of fentanyl begins in the late 1990s…

In the 2000s, the government took steps to limit the supply of prescription pills. Pharmaceutical manufacturers were sued for falsely marketing their products as non-addictive, doctors were prosecuted for overprescribing pain pills, and authorities tightened limits on painkillers. By 2013, prescription drug abuse leveled off as pills became harder to find, but that didn’t help Americans who were already hooked.

When addicts couldn’t get pills, they found more dangerous drugs. Many started using heroin, an extremely potent opioid that is made from the sap of the opium poppy.  Soon, heroin overdoses began skyrocketing and as usage became widespread, users with a high tolerance for heroin began seeking even stronger opioids. And that’s part of what led to fentanyl: a synthetic opioid that is more powerful and cheaper to make than heroin. Unlike heroin, fentanyl can easily be made in a lab.

But fentanyl is about 100 times more potent than morphine. Drug traffickers have been using it to cut heroin to increase the potency and profits from their product. So heroin addicts can consume fentanyl unknowingly, which increases the chances of an accidental overdose. Three Years after heroin deaths began to spike, fentanyl overdoses began rising.

Already, new opioids are fulfilling the next iteration of this progression. Carfentanil, an opioid used as an elephant tranquilizer, is a growing cause of overdoses in The United States. This photo compares a potentially lethal dose of all three drugs, showing that it could take just a few grains of carfentail to kill someone.
In 2016, preliminary estimates of Americans that died by drug overdose are as high as 65,000 people. Experts estimate 2017 will be even worse. As long as people are addicted, they’re going to find ways to satisfy that addiction even if it means using more dangerous drugs, like fentanyl..

Inventor of products to protect the environment through recycling. Thinking outside the box in the implementation of his inventions.

Get all latest content delivered a few times a month.

Get all latest content delivered to your email a few times a month.

Get all latest content delivered to your email a few times a month.

Get all latest content a few times a month!